Background and Objectives: Populus spp. have a wide distribution and also morphological variation in the world. One of the poplar species characteristics is being leaf heterophyllic; therefore sometimes it is difficult to distinguish different clones of a species from each other. Some certain poplar clones are commonly planted in the northern half of Iran. Knowledge of their indicator leaf morphological traits would be useful in distinguishing them from each other, finding these morphological traits was the main aim of this study. As well, the correlation between leaf morphological and the growth traits in mature trees could be led to introduce the leaf morphological traits which the evaluation of tree growth would be possible by them. Therefore, the investigation of correlations among leaf morphological and the growth traits of mature trees was considered as a sub-objective of the study.
Materials and Methods: In this study, we chose 14 clones, commonly planted in the northern half of Iran, includes four poplar species of P. nigra (42.78, 62.154, 63.135, betulifolia), P. alba (20.45, 44.13), P. deltoids (63.8, 69.55, 92.258, marquette), and P. euramericana (154, 214, costanzo, vernirubensis) from poplar clones collection of Alborz research station belongs to research institute of forests and rangelands (RIFR) located in Karaj where 9 individual with the aim of genetic preserve were planted. Studying the morphological traits, three of nine individuals from each clone randomly selected, and after leaves sampling from the height of 3-8 m of seven-year-old trees, 12 morphological traits of leaf were measured. As well as DBH, total tree height and also tree crown radius at any cardinal directions for calculating the crown horizontal projection, was measured in the late growing season in the case of the same three individuals belongs to any clone. Then, the correlations between the mature tree growth and leaf morphological traits were calculated. Finally by PCA (with two methods of correlation between main axes and the traits and also envi-fit) and nested design, the most effective traits for recognition of the clones were determined. Then for certifying the results, mean of the main traits between the groups resulted by clustering was compared by dunnet T3 test.
Results: According to the clustering results, P. nigra, P. alba, and two of P. deltoids (63.8, 92.258) clones were placed in three groups separately. The four P. euramericana clones besides marquette and 69.55 from P. deltoids consisted another group. The five traits of leaf length, leaf area, maximum width of the leaf, leaf dry weight and petiole length were determined as the most effective morphological traits among investigated clones. Therefore the clones are recognized by using these traits. Crown area also was the only growth trait showing significant positive correlation with leaf morphological traits in a way that with its increasing, the traits of leaf length, maximum width of the leaf, petiole length, thicket of the leaves, leaf area, and dry mass were increased.
Conclusion: Respecting leaf heterophylly in the poplar genus and the high leaf similarity of the clones in investigated species, the key traits of leaves include length, area, maximum width, and dry weight besides petiole length were morphological indicators for distinguishing the 14 clones. Consequently, the poplar clones planted in private fields could be identified by measuring these traits to a large extent. It is inferred that crown area is more affected than DBH and total tree height on the leaves dimensions based on the present study. Hence, leaf morphological traits could not be reliable criteria for evaluating the diameter and height growth of the mature poplar trees, at least in the case of the clones investigated in this study. 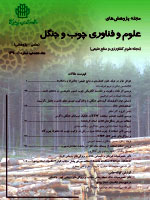